Yarber was selected by the Washington Redskins as a 12th-round pick in the 1986 NFL Draft and spent three seasons as a wide receiver and punt returner. He was part of the Washington squad that defeated the Denver Broncos to win Super Bowl XXII in 1988, leading that team with 37 punt returns. 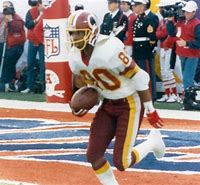 At Idaho, Yarber was a Kodak All-American and the Big Sky Conference's Most Valuable Player during his senior year, catching 75 passes for 1,103 yards. As a junior, he finished 10th in the nation in punt returns and third in the conference with 817 receiving yards on 54 catches. He attended Crenshaw High School in Los Angeles.

On January 2, 2012, following a 4-12 record in the 2011 season, Raheem Morris and his entire coaching staff were fired. On January 9, 2012, Yarber was named the wide receivers coach for UCLA under new head coach Jim Mora.

He received his bachelor's degree from the University of Idaho in 1995. He was married in June 2005 to his wife, Michele. He and his wife have two sons, Robert and Kameryon.